by Prince Far I & the Arabs 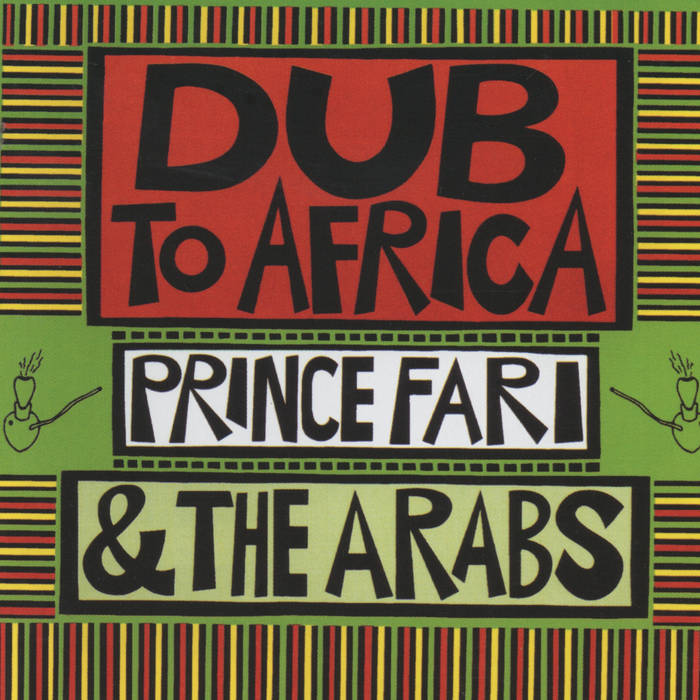 Gavatron The vibration of this album is supurb
Well done all involved.
Rip Prince Far I.
Politics has a lot to answer for.
One love and peace to all.
Many blessings x

Thibaut Devigne Awesome minimalistic dub from the beginning of the 80s. There is an amazingly strong focus on the bass which is made to sound hugely deep and it works to peerfection. Any fan of reggae or dub should listen to this one. Favorite track: Dub to Africa.

The year of 1979 was perhaps the most busy and fruitful in the tragically curtailed career of the gruff but genial reggae deejay known as Prince Far I. After some fifteen years of dipping in and out of the music field and generally skirting its fringes, he had finally during the past couple of years consolidated a following and now had a total of five albums to his name, including two prestigious releases the previous year on Virgin Records' Front Line label with 'Message From The King' and 'Long Life'. As well of course as the 'Under Heavy Manners' set for Joe Gibbs, which had done brisk business and sealed his reputation. Now he was pursuing new goals with a sense of urgency and had set about investing his earnings in yet more recordings, able now to fulfil an ambition to concentrate on producing his own records and those of other artists too.

He gave prompt notice of this increased activity as early as mid-January of that year with four new titles on his Cry Tuff imprint among the first batch of pre-release consigned to the UK following the Christmas and New Year recess. In addition to his own 'Love by Everyone', there were DJs Jah Thomas with 'Bimbo' and Big Joe with 'Nine Me Nine', plus singer Naggo Morris reassuring that "'ah Will Explain' on the warm 'Mean Girl' rhythm, a Larry & Alvin original from Studio One and a particular favourite of the Prince. He arrived here in person the following month, stating to Black Echoes' Observer columnist a release schedule that included an album from Carol Kalphat, a various artistes 'Cry Tuff DJ Session' featuring contributions from U Black, Jah Thomas, Black Skin the Prophet, Clint Eastwood and Ranking Joe, and a bass and drum excursion entitled 'Crocus Bag Dub', though none of which subsequently ever saw the light of day, at least not in these proposed formats.

What did next emerge in early March via Far I's link up with UK label were three discomix releases featuring: Bim Sherman backed by The Heptones and with Jah Buzz appended for further diversion on 'Love Jah', George Calstock coupled with U Black for 'The Ungodly', backed with a Doctor Pablo instrumental 'Righteous Melody', and a UK release for the aforesaid Naggo Morris 'Jah Will Explain', also backed with a Doctor Pablo track 'Wicked Feel It', embellishing what one reviewer at the time fancifully described as "melodica mix-up marijuana-miracle animations." And later that same month, a further six Cry Tuff pre-release titles that had still been awaiting pressing when the Prince left Jamaica for England now finally arrived here: Jennifer Lara, 'Music By The Score', Black Skin The Prophet, 'Red Blood', Rod Taylor, 'Run, Run', Peter Brogo, 'I A Field Marshall', Prince Far I, 'I And I A The Chosen One' and Brigadier Jam Brown with 'Freedom Fighter'.

At the beginning of April, Hitrun organised a Roots Encounter Tour of the UK, starring Prince Far I together with labelmates Bim Sherman and Prince Hammer and backed by the Creation Rebel Band. The package played a series of dates throughout the month with shows in Liverpool, Bristol, Cheltenham, High Wycombe and London engagements at Dingwalls, 100 Club, Tavistock Hall, Club Noreik, Acklam Hall and others.

During May, Prince Far I's third album for Virgin's Front Line label was released. 'Cry Tuff Dub Encounter Part 2' was the follow up to 'Cry Tuff Dub Encounter', which had been issued on Hitrun the previous year. Concurrent with the Front Line release, the Hitrun set-up now put out an unsleeved, white label limited pressing of eight new bass and drum workouts, this present set 'Dub to Africa. Boosted by his live shows, both albums sold well in the UK and figured on the reggae chart. What distinguished 'Dub To Africa' from 'Cry Tuff Dub Encounter Part 2', however, was that whereas the Front Line set employed the usual set of musicians then recording variously as The Revolutionaries, The Mercenaries, The Professionals and for Prince Far I as Cry Tuff And The Arabs, 'Dub To Africa' drafted in Lincoln Valentine 'Style' Scott (drums) and Noel 'Sowell' Bailey (guitar) alongside the Prince's regular bassist Errol 'Flaba' Holt under the aegis Cry Tuff And The Originals. This was the nucleus of the session group who were to revolutionise reggae music in the early eighties as The Roots Radics, slowing down the militant rockers sound of The Revolutionaries and ushering in the dancehall era backing newcomers such as Barrington Levy as well as established acts like Gregory Isaacs and Bunny Wailer.

The title track 'Dub To Africa' had already seen service as the rhythm for both Peter Brogo's 'I A Field Marshall' and the Prince's own toast of the same 'I And I A The Chosen One', and if fact the dub version of 'I A Field Marshall' had been called 'Dub To Africa' on Cry Tuff single release, though it was actually the flip on 'I And I A The Chosen One', itself originally titled 'David', which was utilised now. For the rest, The Orginials laid pared down reworkings of former Studio One rhythms like 'College Rock': ('Glory To God') and Dawn Penn's 'You Don't Love Me' aka 'No No No' ('Hello Love Brother').

The previous six months' itinerary could hardly continue at the same hectic pace and the remainder of 1979 was relatively quiet for Prince Far I. In July, Hitrun put out bassist Errol Holt's vocal cut to the 'Hello, Love Brother' rhythm, cheekily reinterpreting 'No No No' as 'Yes Yes Yes' coupled with a Rod Taylor effort, 'No One Can Tell I About Jah', and in September the label dusted down Peter Brogo's 'I A Field Marshall' (retitled 'Higher Field Marshall') together with the Prince's version 'I And I A The Chosen One' and coupled with this Prince Far I featuring Brigadier Jam Brown on 'Loved By Everyone' for UK discomix issue, and later the same year surfaced 'Cry Tuff Dub Encounter Chapter 3' on the Daddy Kool label and the first of four Prince Far I LPs for Trojan, 'Free From Sin'.