by Lloyd Parks & We The People 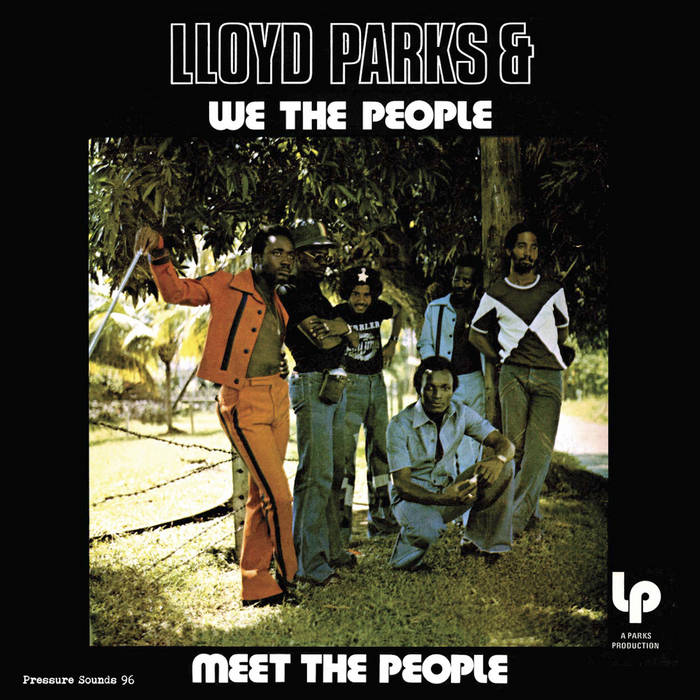 Scott Shisler AKA Goldfinger the Selector

Kingston, Jamaica, spring 1978, and Lloyd Parks is taking his We The People band in to Joe Gibbs’ Studio to record the ‘Meet The People’ album. Lloyd has already achieved big local hits both as a solo singer and with the Termites, and had three solo albums released by Trojan in the UK. Now, as a session musician, he is at the heart of Joe Gibbs’ quest for international success. That February his bass playing helped to propel Althea and Donna’s ‘Uptown Top Ranking’ to number one in the British charts.

Lloyd Parks: “Joe Gibbs’ Studio was like the hang out spot, like the chill spot for every artist. Every day you’d find Big Youth, Prince Far I, Culture and the Mighty Diamonds and all the musicians come around. Before each recording we would play cards and have fun, like find some joke to make off each other, and then we walk into the studio with that same spirit. So that just spin off into magic. Like sometimes when you’re recording the engineer call out ‘ready, ready!’ and then somebody just draw a card, like we call it a card when we jive each other, and then we just have to stop the tune and start again because everybody just laugh. We would be there maybe Monday and Tuesday for a full recording session, but then also every other day just to hang out, cos it was like our recreation ground. And we become the resident band for Joe Gibbs and he called us the Professionals.

“Joe Gibbs’ Studio was near a place called Jungle, so sometimes bad guys come in the yard, but they come just to listen to music, not for violence. I remember there was one time when Joe Gibbs owed some money to Prince Far I or Culture, so some bad guys come in the yard to make trouble. It was a problem with royalties, but with so many bad guys there they manage to resolve it – heh heh. But really the badmen just love the music and love the musicians.

“I also keep working at Channel One studio throughout this time. And boy there was a rivalry between those studios. We called it a musical clash, Joe Gibbs vs Channel One! And everybody trying to say my studio is better than yours. But it was a peaceful clash: it never create problem. What it really create was just better production from both studios.”

By 1978, Joe Gibbs was really starting to taste international success, with the ‘African Dub’ series and albums by Culture and Prince Far I having found a wide audience overseas, and Dennis Brown just about to break through.

“Joe Gibbs himself didn’t really contribute nothing to the sessions. He was busy at his record shop downturn most of the day, and would just swing by at night to check the works. So really he do nothing! But at the end of the day the record sleeve says ‘produced by Joe Gibbs’. In fact the engineer Errol Thompson was really the man, and he and the musicians produce the session.”

After an apprenticeship at Studio One, Errol Thompson had shaped the sound of early reggae at Randy’s Studio, leading early forays into dub, before moving to Joe Gibbs’ new 16-track studio in 1975. The pair were soon nicknamed ‘The Mighty Two’.

“Errol Thompson was one of Jamaica’s greatest engineers, and he was the real producer back then. I rate him like Lee Perry as a producer, a similarly talented person, a champion in those days. All those ‘African Dub’ albums, it was really Errol Thompson behind that, and he bring a lot of inspiration to those versions. Like even on the original of ‘Ordinary Man’, that was Errol Thompson at Randy’s studio putting all those ‘woowoo’ effects on the version. But let me tell you, that studio was full of a load of old equipment. Before he could start each session, Errol Thompson was always patching things up before we could get going!

“It was natural then that I recorded the ‘Meet The People’ album at Joe Gibbs Studio. But when I record it, I still had to book Joe Gibbs studio and pay for my time. Nothing for free! At one time I was in a bad situation with money with my house. So while I was in there making hit songs for Joe Gibbs, I ask him if he could lend me some money, and he said ‘go in to the studio there and make me some songs’, and as soon as I went in he flew straight out of the country! That was the kind of guy he was, maybe not a bad guy, but not a kind guy.

“So I spent my money to make this album. We The People Band was formed in 1975 and I just decided it was time to make this album a couple of years after. At that time We The People was really active, and you can find plenty of film on the internet with Dennis Brown all through that time, like ‘Live In Montreux’, and ‘Splashing The Palace’. Dennis Brown said that I was like his credit card – he used to say ‘I never leave home without my credit card!’ There is also that film called ‘Heartland Reggae’ with U Roy and Jacob Miller, where you can watch the same set of guys as on this album.

“On drums there was Devon Richardson, one of the greatest drummers that ever come out of Jamaica – in fact Sly Dunbar used to admire him a lot, and Sly would say ‘he is the only guy can play back what I am playing’. Devon and Sly were the two drummers who really played all the sessions at Joe Gibbs studio. Then you have Winston Bowen on guitar, that is ‘Bo Peep’. A lot of these guys came through my band and went on to long careers. Like Dean Fraser is on this album, but we called him ‘Youth’ on this LP. So being that I was like the senior recording musician at Joe Gibbs, I introduced these horns sections with these young guys – Dean Fraser and Nambo Robinson. Chico Chin was already in the band and Lloyd Kerr played trombone. Then there was Franklyn Waul, alias ‘Bubbler’, who also start with me – I had to go to his school to get him, and eventually he became popular and create a scene. Ruddy Thomas was the first lead singer for We The People, and then he learnt to work as an engineer at Joe Gibbs, and also as a percussion player. And Mighty Diamonds sing backup vocals.

“It was a really great album, but I never had proper distribution for it. It was just released in Jamaica but I used to sell it for export, so it still made it out to different countries. At the time I had given my first three albums to Trojan, and maybe they could have done a bit more, so I figured that I wouldn’t go that same route for this ‘Meet The People’ album.

“‘Reality’ and ‘Life Ain’t Easy’ were songs I write from just observing things in the ghetto, where people would struggle to achieve the progress they look for in life, and I just get an inspiration, like ‘life ain’t easy down in the ghetto’. I recorded ‘Ordinary Man’ first for the Impact label, which was Randy’s, and I decided to do it over for this. ‘Rock Dis Yah Bassline’ was just me imagining myself giving a live show, like I’m playing the bass live and the audience is responding, so it’s like ‘music is in my bones, and I can’t give it up’”

As the We The People band became increasingly in demand as a live act, Lloyd’s collaborations with Dennis Brown for Joe Gibbs created a huge hit with their recut of ‘Money In My Pocket’, and a brace of albums for A&M. Yet just as the studio’s global reach seemed assured, Joe Gibbs found himself caught up in a dispute over songwriting royalties for JC Lodge’s ‘Someone Loves You Honey’.

“Yes, I played on that tune, and I know the story that Charlie Pride sued him for royalties and that shut everything down, but as far as I’m concerned Joe Gibbs never go bankrupt. He ended up closing the studio for a while, and when he try to open again it never come back the same. But I don’t think Joe Gibbs was really bankrupt, maybe he was playing that situation. And after all this, Errol Thompson end up working in Joe Gibbs’ grocery shop – can you believe that, the great engineer that he was? I don’t know what arrangement he had with Joe Gibbs, maybe it saw him comfortable, but Errol was like one of us, a true musician.”

The ‘Meet The People’ album may have had limited distribution, but its rarity has only added to its strong reputation with aficionados over the years. Today its songs of reality still resonate, and vibrancy of the musicians still jumps out of the speakers.

“I don’t think anything can match the music that came out of that environment in the 70s and early 80s. The mood and groove of the music is totally different to what is happening now, because it has that spirit inside it that came from the musicians hanging out together. We were really full of fun in those days, and love those recording sessions, and a lot of hit songs really come straight out of that spirit.”