by Yabby You & King Tubby 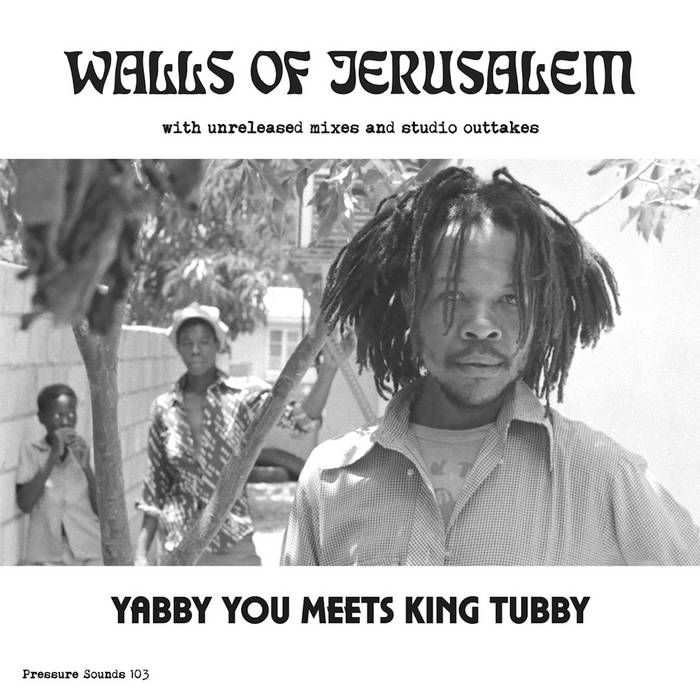 Thibaut Devigne Yet another excellent re-release of some excellent reggae music. There are two interpretations of each dub, and the first part has Yabby's lyrics on them. It is all varied enough that it feels like a complete album. Favorite track: Chant down Babylon.

Andrew Jervis Deep, dubby, soulful and storied, this is a Jamaican essential. Favorite track: Plague on the land.

The reputation of the ‘Walls Of Jerusalem’ album has been somewhat clouded by its complicated history. It was originally released on a very limited pressing on the Prophets label in a blank white sleeve, without any credited artists. Then it was retitled ‘Chant Down Babylon Kingdom’ for its UK issue on the Nationwide label, with the artist misleadingly named as ‘Yabba Youth’. In fact, the album is a unique collaboration between Vivian Jackson, better known as Yabby You, and Osbourne Ruddock, alias King Tubby, and showcases their talents on one side each of an album split into vocals and their dub versions. When Yabby reissued the album, he made his artistic intent clear by renaming it ‘King Tubby Meet Vivian Jackson (Yabby You)’, also crediting Tubby as arranger, and interestingly the sleeve carried one of the only reported interviews with Tubby.

King Tubby: “Me like Yabby You because of how him tink: as a man you check him music, and see what him a gwaan wid. Him easy fi get on with. His intelligence makes his music appreciative by Jamaicans and foreigners alike, even though he is a dread. Not a Selassie dread, he is a Jesus Christ dread. A Leo, a man of unique thought, take for eg. all the cuts on his present LP. Dem original. A so him res.”

Yabby then comments on Tubby’s personal influence on him.

Yabby You: “Well when I man in a Tubby’s presence him mek I feel like him bredda, and from ever since I a youth a grow, I man write the song them, I man would a carry it to him and him would mek me sing it to him, and say whether it sound good or not. From I man know him, we never have a rash word, we always cool. Well I feel say Tubbys is a true Aquarian man, him na cheat no one, for him and I know is a duty we have fi do, so we just do it.”

Yabby’s wife Jean was a close observer of their collaborations and today remembers their relationship well.

Jean Vencella Williams: “Yabby and Tubbys was good friends. They were very close. I think Tubbys loved the music as much as Yabby, and he was a quiet person – I don’t know him as a talkative person, more someone into his studio. If Tubby did have different beliefs in religion then I think maybe they avoid talking about that stuff, because you know they call Yabby the Jesus Dread. I never heard of no argument between the two, maybe they didn’t discuss that so they wouldn’t get upset with one another. They were close that way. And Yabby loved dubs, and he have albums that were just straight dubs – I think he put special care into those.”

King Tubby had taken a crucial role in creating and promoting Yabby’s first studio production.
King Tubby: “When I first met Yabby You, he had the idea of a song and the song was not yet complete. We got together on this song and it turned out to be Yabby’s first hit. Thereafter Yabby would check I out and we would get together in different arrangements.”

The hit referred to is ‘Conquering Lion’, and when I talked to Yabby a few years before his death, he described how their working relationship flowed from that first success.

Yabby You: “King Tubbys did have a lickle dub studio, and him was the studio engineer. When him hear the riddim he love it cause it was a brand new sound. And I was staying in Waterhouse at that time and his studio was in Waterhouse, so everything did just work out eventually. When his sound played ‘Conquering Lion’ it really help… and then the people just loved it. So after me have about ten song me realize say me can release a dub LP, and when the dub LP came out it was so fascinating that it encourage me now to make version two, three, four and so on. Then you have ‘King Tubby’s Meet Yabby You’ (aka ‘Walls Of Jerusalem’) where I sing six songs on one side and the dubs are on the other side – well that is a classic, you know.”

Most releases from Tubby’s studio at this time, especially 7” singles, were mixed in mono or near mono, partly to make them compatible with playing out on a sound system. Unusually, ‘Walls Of Jerusalem’ was carefully mixed to master tape in full stereo. Some later pressings and single releases from the album, like ‘King Pharaoh’s Plague’, were mixed down to mono, and when certain tracks have been included on latterday compilations it is the mono versions that have been used. So it is a revelation to hear the album in full stereo as Yabby and Tubby intended, and, considering the mixes were created from 4 track tape, they paint a very ambitious stereo picture.
Most tracks have spot reverb effects panned opposite to the guitar and keyboard track, the title track has vocals that move from side to side, whilst ‘Go To School Jah Jah Children’ features double-tracked vocals hard panned left and right. The dub mixes take this creativity further, with reverb and echoes panned opposite each other, whilst the horns and rhythm tracks dance across the stereo field. Yabby carried this idea over onto his next album, ‘Deliver Me From My Enemies’, mixed by Prince Jammy, where the horns and rhythm tracks occasionally swap sides, but without the subtle positioning of reverb and echo heard on this album. So ‘Walls Of Jerusalem’ is very much a conscious artistic statement, mixed with a deliberate concept to create a more sophisticated listening experience than was typical at the time.

Jean Vencella Williams: “Well Yabby really put a lot of care into his music – if it’s not right he not going to put it out. He spent a lot of time practicing before going into the studio. I been to the studio many times with him, and I would sit and watch, whether he book 4, 6 or 8 hours. Especially Channel One and Tubby’s, I went to Tubby’s many times. And whenever he go to the studio he book enough time to finish whatever he wants, he always ensure that he don’t rush or run out of time. Boy, he spent a lot of time in the studio! And any time he get money he’d spend it in the studio.”

This reissue includes some recently discovered studio outtakes that shed a revealing light on Yabby and Tubby’s working methods, and put the listener right next to the musicians in the studio. They frequently tried out different approaches on alternate takes, bouncing the 4 track tapes from one machine to another to free up tracks for overdubbing. Alongside chatter from the studio musicians, you can hear Yabby (in the vocal booth) communicating with Tubby (over his ‘talkback’ mic) as they shape the finished tracks. Yabby is constantly conferring with “‘bra (brother) Tubbs”, whilst Tubby keeps track of multiple takes of the same song. In the runup to ‘Love Of Jah’ you can really hear the two interacting, as Yabby asks “How that sound?” Tubby, typically understated, replies “Not bad.” Other highlights include “The Man Who Does The Work”, with Yabby singing a beautiful solo vocal with far less harmony accompaniment than on the released version, and an alternate cut of ‘Go To School Jah Jah Children’ with a flute and horn accompaniment (also used on the album’s dub version) and markedly different lyrics.

Yabby You: “When you’re voicing now, he (Tubby) could tell you how to get that certain quality. Most engineer them never know that, but through him was a technician he knew how to build up on the rhythm section, and how to put on resistors on the bass, and then it have a special sound. Tubbys didn’t know how to arrange harmonies and them things, but what him really know is how to deal with the sound. Like if him hear a sound him can say it will be better if you change that sound until we reach one that fit in. And then that inspired you as a singer now to sing ‘pon it comfortable, you know.”

By the 1980s Yabby’s musical output had slowed, but he was still producing some digital tunes at Tubby’s upgraded studio when King Tubby was brutally murdered in 1989.

Jean Vencella Williams: “Of course I remember Tubby’s death. You know, Yabby was not someone to really show if he was upset, he was more reserved than that. But I think he really missed Tubbys because of the friendship they had and his connection with the music.”

‘Walls of Jerusalem’, the last full album that they worked on together, is a fitting testament to their friendship and shared artistry.

Special and heavy thanks to the following musicians who didn’t jester:

Mixed at: King Tubby’s Studio, except ‘Fire Fire Dub’ and ‘Stand Up And Fight Dub’ mixed at Channel One Studio

Special thanks to: Jean Vencella Williams, Jeremy Freeman
Produced by and under license from the estate of Vivian ‘Yabby You’ Jackson