by Yabby You & The Prophets 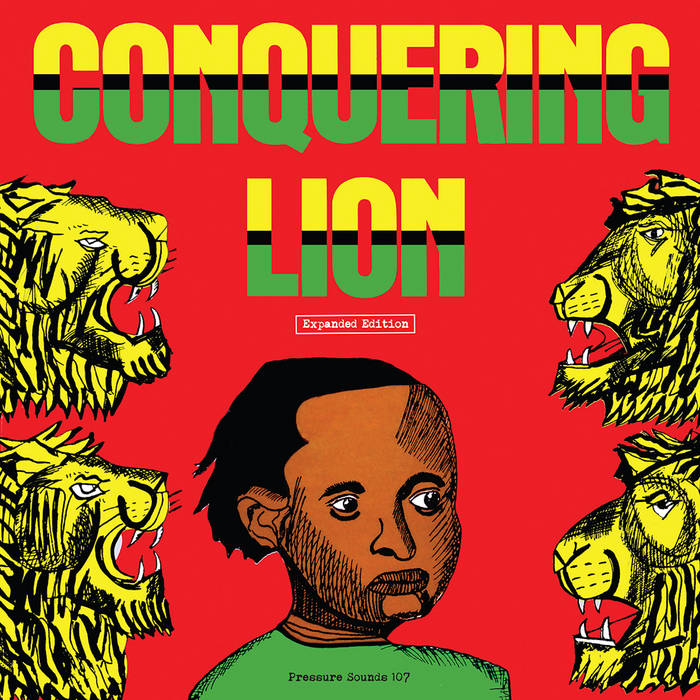 Markus Bader Truly essential!!! B&F's Jesus Dread compilation was the start for me, and I still value it above many other releases. Still it is a revealation to hear this album in its original running order, followed by dubs that compile the best of Bs and Prophecy of Dub. And it SOUNDS so incredible!!! Any fine detail, and an emphasis on the bottom end. Pete Holdsworth, thanks a lot. Perfect, nothing less...

‘Conquering Lion’ stands as one of the few truly essential albums of the roots era. As devotional as anything by Burning Spear, as polemical as Bob Marley, and as militant as the Mighty Diamonds, the album also communicates a haunting spiritual quality that is uniquely its own. Amazingly, for such a coherent work, the tracks were recorded over a period of at least four years, yet come together to present a single coherent vision. The album was first issued in Jamaica by Micron, and in the UK with a different tracklisting as ‘Ram-A-Dam’ on the Lucky label in 1976. Here the album is presented for the first time in expanded form, together with its dub counterpart.

Vivian ‘Yabby You’ Jackson is often portrayed as a strange, otherworldly figure. Yet his life was filled with two opposing forces, the spiritual and the earthly. Even as Yabby was yearning for a higher plane of existence, he was scratching out a difficult living in the ghetto. Whilst warning of sinful secular behaviour, he was working at the race track taking bets. As well as creating some of the most powerful and heartfelt music to come out of Jamaica, Yabby was busy cutting deals with studios and musicians, and hustling round the record shops to sell his products. And these contradictions seem to have fuelled some of his best music, pushing him into places that other artists shied away from. When I had a couple of lengthy phone conversations with Yabby shortly before his death, his religious musings were frequently interrupted by the loud squawking of the chickens in his yard. If the theology he espoused seems stern and prescriptive, he could also be charming and generous in conversation.

‘You have the rasta business, like the rastamen believe Emperor Haile Selassie is the creator who create people. I used to try to show them he is just another man like anyone of we. I show them Jesus Christ is recorded in history as a great individual and him also great. So with God now: I was trying fe educate them and I feel like if I use music I will be able to spread out all over the world, spread out and reach those type of people, for them have a zeal for godliness.’

So Yabby’s religious views put him immediately at odds with rasta orthodoxy, and he often wore his belief as a shield against the world, certainly against the more ruthless side of the record business. Indeed Yabby’s personal dogma was sometimes deployed as a tactic to clinch a negotiation, by wearing down his ‘less godly’ opponent to the point of compromise. And the unshakeable strength of his beliefs gave rise to some of the deepest of roots music.

Run Come Rally + Rally Dub
The album opens with an immensely powerful call to turn away from the earthly wickedness of ‘the land of the sinking sand’ before the upcoming apocalypse. ‘The sun shall be darkened / And the moon shall be turned into blood / One of these days.’ ‘Run Come Rally’ was recorded by Lee Perry at his Black Ark Studios, and the dub contains typical disruptive Perry touches, like cutting in and out on isolated syllables of the voice.

Jah Vengeance + Tubby’s Vengeance
Amazingly the album’s second track intensifies the sentiments of the first: ‘Jah Vengeance surely will come down on anyone / Who still insists to stay in wicked Babylon’. Its release as a single was backed by a stark King Tubby’s dub which perfectly highlights the end of days sentiments of the vocal, but Yabby explained that the backing track was again recorded at the Black Ark: ‘Black Ark was a great studio and Lee Perry is really a great producer with a great sound. You know the tune named “Jah Vengeance” and the one named “Run Come Rally” and the first song Wayne Wade do named “Black Is Our Colour”? Well I did those three tunes at Black Ark. Them times there Bob Marley used to be up there. Lee Perry have a unique sound when you recording. Is a pity him turn to the mad business, but between me and you I don’t really think him mad, you know, him just turn to that business. Him had to keep off certain artists who come pressure him for money. But sometime me think him take it too far.’

Conquering Lion + Conquering Dub + Big Youth Fights Against Capitalist
One of the most devastating debut singles of all time, the vision recounted in ‘Conquering Lion’ gave the young Vivian Jackson his nickname of Yabby You. Yabby told me the history of how he created this classic, expanded here with two of its most imaginative versions, a mix from the ‘King Tubby’s Prophesy of Dub’ album, and the brilliantly named B-side of Big Youth’s ‘Yabby Youth’. ‘I recorded the riddim down at Dynamic – the drum, the bass, the riddim guitar and the organ. From the day it do at Dynamic everyone know say it going to be a hit. Waterhouse and Gullybank was an underworld place, where most of the sufferers come from, and they never expect someone from Gullybank would make that quality or make that type of riddim. So all of them things there add together a lickle bit. “Chinna” did play the guitar, Aston “Familyman” Barrett play the bass and Leroy “Horsemouth” Wallace play the drum. I never have the experience to know say well I must get a 4 track tape so we just use 2 track tape. So after we put on the riddim pon one track, we only had one track left and “Familyman” dub the organ onto that second track. The rest of the instrument them me dub on afterwards at Tubby’s. We dub on the horns, the voices – like the lead and the two harmony. And then that inspired you as a singer now to sing pon it comfortable, you know.’

Covetous Men
A stinging denunciation of greed, Yabby’s lyrics here move from attacking avarice in general to exposing the exploitation of the poor, ‘The big fishes feeding on the small ones’. Sadly no dub version exists for this track, which balances its message of condemnation with the optimistic conclusion that ‘Just through our faith, that’s why we overcome’.

Anti Christ + Anti Christ Rock
Yabby rails against dissembling and hypocrisy on a track renamed ‘Dem-A-Wolf’ on the ‘Ram-A-Dam’ album. ‘See them there / Them favour Christ but them a Anti-Christ.’ The dub shows King Tubby masterfully emphasizing the ‘flyers’ drum pattern.

Carnal Mind
This is probably the closest Yabby ever came to invoking the sound of a Pentecostal church meeting, as verses from the Books of Romans and Psalms are quoted in an uplifting devotional. With no dub existing for this track, we can only speculate on how Tubby might have transformed it.

Jah Love + Jah Love Dub + Warning Version
Originally released as a single with the title ‘Warn The Nation’, the lyrics call for an escape from the mental chains of slavery: ‘No shackles on our feet, no whip on our back / Yet I and I must realize we are still being enslaved’. The two Tubby’s dubs bring out different nuances of the backing track, particularly the heavy one drop drums and their repeating hi-hat pattern.

Love Thy Neighbour + Love Thy Neighbour Version
Yabby casts himself as a preacher addressing his flock after a unique intro featuring Richard ‘Dirty Harry’ Hall playing the fife, a simplified flute that originated in medieval Europe, and in Jamaica is usually made from bamboo. ‘Me used the fife, and people always wonder where me get that sound. Well sometimes we used like three fifes, like lead, tenor and alto, and that fife thing was a unique special sound. Tommy McCook would play one fife and you had this brother named “Dirty Harry” who used to blow tenor sax too, and then me would dub back the third one on top. You see, horns take a lot of time and very expensive. And those days reggae music was very poor, and so most producers try fe avoid using horns.’

Love Of Jah + Love Of Jah Version
A simple song elevated by strong harmonies and a plaintive lead, the dub version is sparse and stripped down, highlighting the insistent percussion.

The Man Who Does The Work + Work Without Pay Version
Like ‘Love Thy Neighbour’, this version is mixed without clean drums and bass. Both versions are compelling nonetheless: here echoes on the organ catch the ear, and both versions show varying degrees of high pass filtering across the mix. ‘Tubby’s have that precise timing like with all the echo. And him have that high pass filter – him have that sound inside of the board, and him did arrange it. Him was one of the greatest engineer, and him was a technician too, and him develop the sounds, like all the bass – him have resistors and things there and him make it become more round.’

Yabby’s music is both intense and warmly human, both militant and yet strangely fragile, a quality it shares with some of the greatest instrumentals by Augustus Pablo, who appears here on piano. The songs are defiant and strong, but at times seem almost translucent, inviting the listener in to share the vision of their composer. With King Tubby’s dub mixes reassembling the songs into fascinating new patterns, ‘Conquering Lion’ is a timeless classic of Jamaican reggae.
Diggory Kenrick