When Jah Shall Come 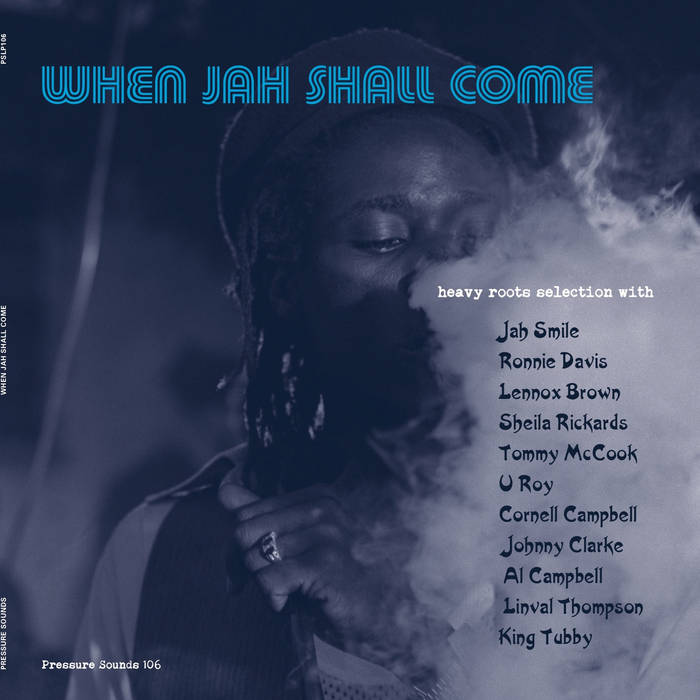 Lord Dubious Another fantastic bunch of Striker Lee productions from the roots era brought out of obscurity by the Pressure Sounds crew! Rare sides with no sacrifice in sound quality. If you love roots reggae you need this collection in your life! Favorite track: War Zone.

Etienne Stekelenburg This is such a briljant album, as if you are invited to take a seat in the controlroom and witness the recording of some of the best known tracks. Thank you for releasing this gem.

Mark 007 From the golden era of Jamaican Roots, this is a wonderful collection of rare and special tracks. There's a hazy vibe and a spirituality that permeates most of them. The transfer to CD is top notch. Without the cracks and pops of Jamaican vinyl the tracks shine brighter than ever. Pure roots of the highest calibre from the most fertile and creative period in Jamaica's Rastafarian music history. Favorite track: Every Knee Shall Bow.

kent1012 It includes rare cuts from some of the greatest reggae talents and superb sleeve notes from the late Bunny 'Striker' Lee.

“Me used to record every day in the 70s. Sometimes 7 days a week, day and night inna the studio, daytimes in the main studios and then night times in Tubby’s til daylight come again, and just get an hour’s sleep and then back to the studio again. King Tubby’s Studio was really like my headquarters. Me record the backing track at the big studios, but then most times me voice and mix at Tubby’s. When Tubbs stop mix it was me and Philip Smart, Pat Kelly, then Jammys and Scientist. Them always ready fi work with me when I work, and most times that was night time when it quieter. Me love the 4 track tape cos it’s what we have at Tubby’s, even when most everyone else move up to 8 or 16. That one-inch 4 track tape was cheaper and smaller, so it easier to store and you can carry it overseas. And 4 tracks is enough when you know what you’re doing.

“So me telephone round the studios and book them, and then organize the musicians. The core musicians then was Robbie, Santa and Chinna (Robbie Shakespeare, Carlton ‘Santa’ Davis, Earl ‘Chinna’ Smith). Sometimes me drive round everybody, and then me get a licence for Santa, so him could use my car and pick up the musicians and their instruments in the big Buick. After that me buy Robbie a bike, a Honda, and then me buy Robbie him first car, a Triumph. Me have some contacts with the licence department, so provided you could read and drive I could get you a licence! Me help whole heap of man get licence, like Lee Perry. Me also buy Santa a drum kit, but most of the studio like all Harry J have them own drums.

“So every Thursday I used to record at Harry J Studios, the whole day. We record lots of songs there for the Total Sounds label. The engineer was Sylvan Morris, and Morris was like the signpost when you recording, cos if him not dancing then you know something wrong. If Morris dancing happy then the song most probably be alright. Morris record all Bob Marley and them and always get a sound: them have a Helios mixing board and probably the best live room. Me and Morris was friends, so if the engineers them have any spare time, them would a call me and we book it. Them have the 8 track and 16 track, but me always prefer leave with a 4 track (tape).

“Then you have Dynamic Sounds which was like my home ground, cos I was the staff producer there before. Dynamic have a sound where no matter how much you push it, the bass never distort. Them really the most advanced studio, and them represent MCI, so them always have the latest MCI board, and then pass on the old boards to the other studios, like Tubby’s and all of them. After Dynamic have the Rolling Stones (for the ‘Goat’s Head Soup’ album) and become 24 track, I would use the 24 track but only record on 4 tracks at a time, just like it was still a 4 track. So one song on tracks 1 to 4, and a next song on tracks 5 to 8 and so on – 6 different songs playing all at once! Tape did get scarce one time and 24 track tape was very expensive to buy then, but I made it work cheap. And then we convert to 4 track at Dynamics, take each group of 4 tracks off onto a new tape, and carry back a Tubby’s.

“Federal Studios, which is Tuff Gong now, did have a good sound too. I used to use it sometimes in the night time. They did have an engineer named Buddy Davidson, and Paul Khouri was the man who cut the stamper. Me also use Randy’s Studio a lot when Errol Thompson was there ca him a brilliant engineer, but not so much when him leave. That room always sound good, but you still need the best engineer.

“When Channel One first open them give me the first session free to test out the studio. Sid Bucknor was the first engineer, but him and them did have a falling out when them want him to show them something on the board – they had a real expensive board by API. Well Siddy was a hard-headed man, and him did tell them the parametric EQ was just there for decoration! So Jojo (Hoo Kim) say ‘this guy is a madman, get rid of him’. Then Ernest (Hoo Kim) continue as the engineer, cos him knew sound system and jukebox and the pinball machine, cos they were the family business. Ernest very skilful now and could fix those things, so him find it easy and become a great engineer. Channel One probably did have the best drum sound of all the studio. But Herman Chin Loy did borrow Channel One’s drums for him own studio Aquarius, and find them didn’t sound like Channel One at all! And we all just a laugh and say is not the drum, is the man who a play them. That’s why Sly (Dunbar) did a get so popular, and me never really use Aquarius.

“After Sid Bucknor fired by Channel One now, I take him round by Duke Reid (Treasure Isle Studio) and Duke give him a new job. ‘None Shall Escape’ was recorded there by Siddy on 8 track, and Siddy kept that tape until now. We bounce the session down to 4 track so we could work with it at Tubby’s, cos Duke did have 4 track machine and 8 track – them get the old 8 track (MCI) board from Dynamics. And then we do ‘Enter Into His Gates’, and when we dub on the horns we call it ‘The Arabian Sound Of Reggae’. I tell you a thing about that tune now, it was a remake of one of my own riddims that I make over as a ‘flyers’. That tune originally named ‘Joe Louis’ and then we overdub it as a Moog tune with that synth guy Ken Elliot inna England, and then it name ‘Star Trek’ by The Vulcans. After Duke Reid, I take Sid Bucknor to England and get him a good job with Vic Keary at Chalk Farm Studio in Camden.

“When Joe Gibbs open him new studio he bring in Errol Thompson as engineer, and me take over Joe Gibbs’ old studio, but me never really open it for a few years. Me and Joe Gibbs was friends, but most times we often inna fight, but still we make it work. When Channel One a beat up Joe Gibbs with them heavy sound, we take Errol Thompson down there and him see all the parametric EQ on the (API) board. Joe Gibbs had a nice board then, a big MCI from Dynamics, but it nah have that parametric EQ on every channel. So him go buy some parametric EQ and hook it up so him also have that sound, and me use them plenty times. Errol Thompson was a brilliant man – later him wire up my own studio.”


Linval Thompson is represented by two unreleased tunes, and is also heard in the runup to ‘Tommy’s Vibration’. Once the ‘flying cymbal’ sound had taken off, Bunny often recorded a ‘flyers’ and a straight version of the same rhythm: ‘Tommy’s Vibration’ is a classic but little known Tommy McCook instrumental on the flyers cut of Linval’s ‘Jah Jah A The Conqueror’. ‘Ethiopian Rock’ is a total scorcher, the only recorded tune by the deejay Jah Smile, before Bunny persuaded him to turn to singing and changed his name to Barry Brown. In a healthy spirit of competition, Bunny often tried out different singers on tunes that he thought would hit, hence Ronnie Davis’s soulful take on Johnny Clarke’s ‘Every Knee Shall Bow’, Johnny’s version of Horace Andy’s ‘Better Collie’, and Johnny and Horace sharing vocals on ‘No Man Is An Island’, all unreleased until now. ‘No Babylon Shall Escape In This Time’ has Johnny Clarke and ‘Bongo’ Herman Davis recorded over the original version side of Johnny’s ‘None Shall Escape The Judgement’. ‘Life Of My Own’ is a beautifully constructed lament by a singer who neither Bunny nor various expert ears have managed to identify: at Bunny’s suggestion he is credited as ‘The Raver’. ‘War Zone’ and ‘Keep On Running’ are examples of Tubby’s mixes that have had further effects dubbed on elsewhere; sound systems and foreign record labels occasionally did this to manufacture their own specials from existing mixes. ‘Jamaican Fruit Of African Roots’ has recently been the subject of the fascinating documentary ‘Shella Record: A Reggae Mystery’; the Lennox Brown cut here has only just been discovered. Also included are two stinging dubplates by Cornell Campbell: the first is aimed straight to the head of Arrows sound system, while the second, recorded in the early 80s, sums up the vital partnership of two of Jamaica’s musical giants: