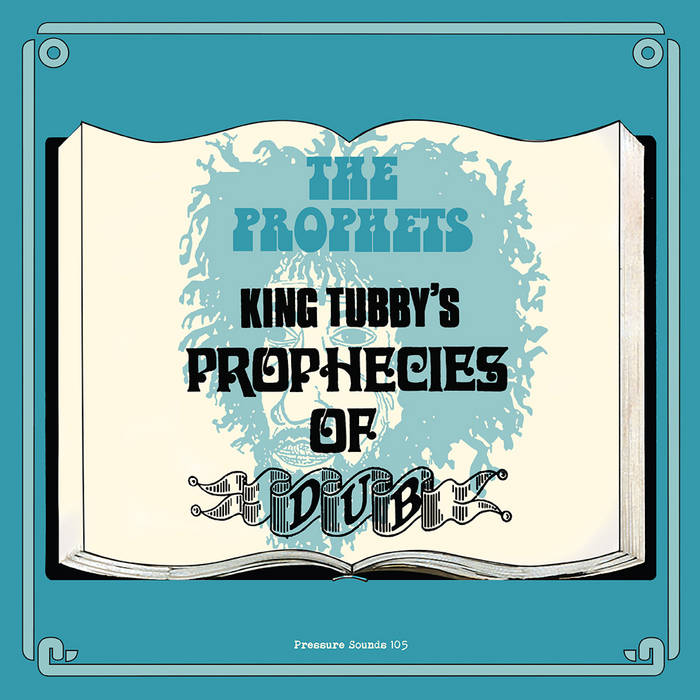 ‘King Tubby’s Prophecies Of Dub’ almost looks like an album that was designed to confuse record collectors and dub enthusiasts. Firstly, the record carries nearly the same title as a slightly earlier release, also produced by Vivian Jackson, aka Yabby You.

Pat Kelly: “Well fortunately Yabby You put my name (on it). I think I made them three one night, and then another week also he come back and do another three, and so it was done over some period of time. Yabby was with me most of the time, but I was always left to do what I wanted with the mix.”

Secondly, King Tubby is named in the title, but the rear sleeve states that the album had ‘Pat Kelly at the control’. This is more understandable, as the record was mixed at Tubby’s studio and carries its signature sound. After 1975, Tubby had partly stepped back from mixing work, but was still credited with most of the music coming out of his studio.

Yabby You: “Pat Kelly is a nice guy and a real gentleman, so I give him full credit as the engineer. Him have a different sound from Tubby’s – each have their own style, but Tubby’s have the talk, and the sound and the studio named King Tubby’s. So Pat Kelly’s works wasn’t well promoted like Tubby’s, and when the customers come they want Tubby’s name.”

Pat Kelly: “I mix a whole lot of thing for many people, but often the producer don’t credit the engineer properly, they just put King Tubby’s Studio. But Tubbys used to mostly concentrate on his electronics at the time. He was also a technician, so he loved building the amplifiers and things like that. That true story has never been told. I know it too, but I’m gonna offend a lot of people, and I don’t like offending people… I’m goin’ tell you something about knowledge: if you’re accustomed to a pattern, or something you’ve been hearing for years, it’s quite difficult to accept something else. So best to leave that! Heheheh.”

And thirdly, further confusion comes from the fact that most of the backing tracks used were not actually produced by Yabby, but belonged to Bunny ‘Striker’ Lee.

Bunny Lee: “Yabby You and Pat Kelly go behind my back and make it up. Me never even know about it til years later when Steve Barrow bring it to my attention. But it was my riddims and they used them.”

Pat Kelly: “Most of these tapes were Bunny Lee tapes, and Tubbys get a cut from the song. A lot of people didn’t even know that it wasn’t Tubbys who went to the studio and do the recording, it was Bunny Lee. Bunny Lee would be with the musicians, and then take the tape to Tubbys, and he say he like that one, or he need a cut from this one.”

Bunny stored his multitrack tapes in a big wardrobe in the studio, allowing King Tubby to cut dubplates from them to be played in the dances.

Pat Kelly: “That big wardrobe was behind you when you sit at the console, and there was like a wall. I know generally when anything goes in there… it doesn’t come out again. Hahah! Once they go into that place, it’s not likely that they coming out!”

Bunny Lee: “I used to leave all my tapes round at Tubby’s place. After me did put in a little air conditioner in the studio, we made the space to store them. Then Tubbys could cut dubs off my tunes and get them popular, so when they get released people know them already.”

Whether due to a misunderstanding or some long forgotten agreement, it was these 4-track tapes that Yabby presumably felt entitled to use to create this LP. The two producers had shared backing tracks before, with Yabby recording Tommy McCook’s sublime ‘Death Trap’ over one of Bunny’s rhythms, and Bunny had long acted as a mentor to Yabby.

Bunny Lee: “Me start Yabby You as a salesman, me used to give him records fi sell. Me give him the record for forty and him sell it and make a shilling pon it. From there me help bring him into the business, and get Yabby’s first tune finished round by Tubby’s studio.”

Yabby You: “At the time, me and Bunny Lee work at the studio at the same time, but until now me and Bunny Lee always close. Him realized that I don’t know the game cos him was a veteran producer when I first come, and Bunny Lee is one of the people that encourage me and push me along.”

Whatever the reason, eleven of the album’s tracks were dubs of the latest Bunny Lee productions, and by delving into Bunny’s tape archives we can see that the rhythms were often pulled from the same 4-track reels, and sequenced pretty much in the order they came off the tapes. So the opening two dubs are from the same multitrack: Linval Thompson’s ‘Long Long Dreadlocks’, and an unreleased cut of ‘Simmer Down’ by Johnny Clarke on a modified ‘Move Out Of Babylon’ rhythm. This is followed by Johnny’s version of Curtis Mayfield’s ‘Ten To One’ as covered by the Mad Lads. Then there are four cuts pulled from Delroy Wilson’s ‘Sings For I’ album, and two from Horace Andy, ‘Serious Thing’ and ‘Man To Man’. After Johnny Clarke’s ‘Live Up Jah Man’ and ‘Stop The Tribal War’, the album concludes with the sole Yabby You rhythm, a dub of Dicky Burton’s ‘God Is Watching You’ that is noticeably different from the Tubby’s mix as heard on the ‘Beware Dub’ album. Throughout, Pat’s mixing is detailed and subtle, focusing the listener into the musicality of the backing tracks.

Pat Kelly: “When you listen to reggae, then you have that sort of atmosphere like jazz, because of the drums. You listen to jazz and it’s the drum effects. So the drum and bass is dominant in reggae, just like in jazz. I was listening to jazz as a kid. Can you imagine, I was listening to Johnny Mathis, which wasn’t the normal thing for a kid my age. I used to make a lot of jazz cassette from Tubby’s vinyl, and take them off home. I don’t know if it had any influence on the dub as far as Tubbys concerned, but he had all sorts of jazz – Miles Davis, Coltrane, Alice Coltrane… I used to tape them and take them off.”

Pat Kelly had a glittering career as a vocalist, alongside his spells as an engineer at Randy’s and King Tubby’s studios. Although he specialised in recording vocals, he also mixed some classic dub sides, like the versions to Ricky Storme’s ‘Trod Along (Zion Pathway)’ and ‘Nice Time’ by Don Carlos. In later life Pat often seemed dispirited by the music business and was unwilling to be interviewed, but one afternoon in 2005 round at Sonic Travel in Harlesden he opened up to me about his time at King Tubby’s.

Pat Kelly: “I start working with Tubbys before Jammy, after Phillip Smart went to America. I used to be paid direct by Tubbys, but if you had extra time or over-time, the producer would pay you for that. Tubbys paid weekly, and whether you come to work or not, you still get your pay. I loved the music with a passion, so we didn’t look at it financially. Beca’ remember, we were living with our parents too, it was a different era too; now young guys quick to go out and live with his girlfriend, but those days you lived with your family, so you didn’t have those demands, so you were just happy to make a record and hear it’s playing on the radio.”

The LP was released in 1976 in very limited numbers on the Prestige label, probably with the involvement of Prince Tony Robinson, with a further limited pressing appearing on the Prophets label. This reissue at last allows an obscure and mysterious album to be enjoyed by a wider audience.

Pat Kelly: “Dub always have its place, just like vinyl record will always have its place, next to CDs. That’s what’s nice about the business – the flexibility, everybody has a choice. I worked for about four producers, but honestly speaking I don’t have any regrets. I didn’t make a lot of money out of it, but I earned something… I have no regrets at all in this business, so I don’t know what we sitting and lamenting over! Heheheh. And there’s not many professions you can go into, and at this age you can be still living off it.”

Yabby You: “Dub music carry the message. Ca if you play the music it captivate your mood, it bring you and draw you out of that folliness, and brings you into consciousness.”